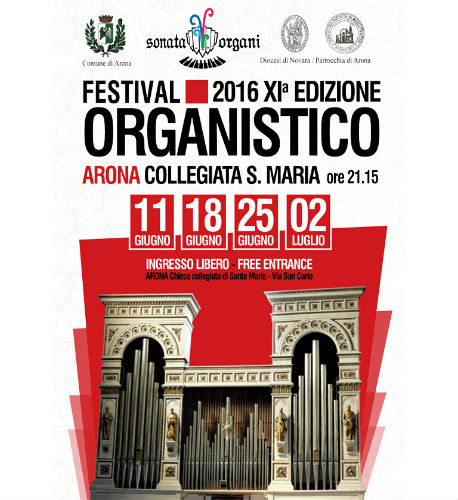 The cultural association "Sonata" is pleased to present four concerts of 11° Festival Organistico Internazionale di Arona, which will take place from 11 June to 2 July 2016 under the artistic direction of Christian Tarabbia. After the great success in the past Edition, which marked the tenth anniversary of the Association and the 30th anniversary of the organ building of the Collegiate Church of Arona, the review will continue to host the best organists of the panorama international and this year will propose a full calendar and articulate.

Organ festival concerts will take place all at the Collegiate Church of Santa Maria in Arona on precious organ Bardelli Dell'Orto and Lagos, will begin at 21.15 and will be free of charge.

Program of the 11th International Organ Festival in Arona:

Saturday, June 18 Second appointment with the organist Daniel Zaretsky, Russian concert artist of world renown and Professor of organ at the Conservatory of St. Petersburg.

Saturday, June 25 The protagonist of the third concert will be the organist Dutchman Henk de Vries, holds several historic organs in the Netherlands and member of the Board of the organ "Schnitger" at the Martinikerk of Gröningen.

Saturday, July 2 The fourth and final event will be a concert for organ and trumpet. As soloists will be speaking to the young Swiss organist Adrien Play and on trumpet Kim MAK.

For further information on programs, dates, the tools involved and on the activity of Sonata Organs you can also consult the website of the Association www.sonataorgani.it or follow us on facebook https://www.facebook.com/sonataorgani/

The organ The organ of the Collegiate Church of Santa Maria in Arona is the first built by organ builders aronesi Bardelli, Dell'Orto and Lagos in the years 1984-1985. The instrument, contained in a Cabinet of the late eighteenth century, counts 39 records distributed over three keyboards and pedals for a total of 2528 reeds. Prominent flavor is the exclusive use of muleteers in wind at borsini, entirely made in solid mahogany. These six wind-chests are used for the first time in Italy, in a new building, from the days when mechanical drive tools were set aside. The finishes of the console are walnut and olive, while the keyboards are plated in ebony and ivory. The pedal is built on the basis of an 18th-century model. The transmission system is entirely mechanical buttons suspended. All registers of the family of the biggest are in Tin to 80%; wooden logs are made with scents of PEAR, oak and mahogany.

"SonataOrgani" profit association "Sonata" founded in December 2005 wants to spread culture through musical events, with particular attention to young people and to the organ music. Want to enhance the precious instrument housed in the Church of Santa Maria in Arona and many historic organs located throughout the area of Novara. The Association "Sonata" is open to all who share the spirit and ideals.