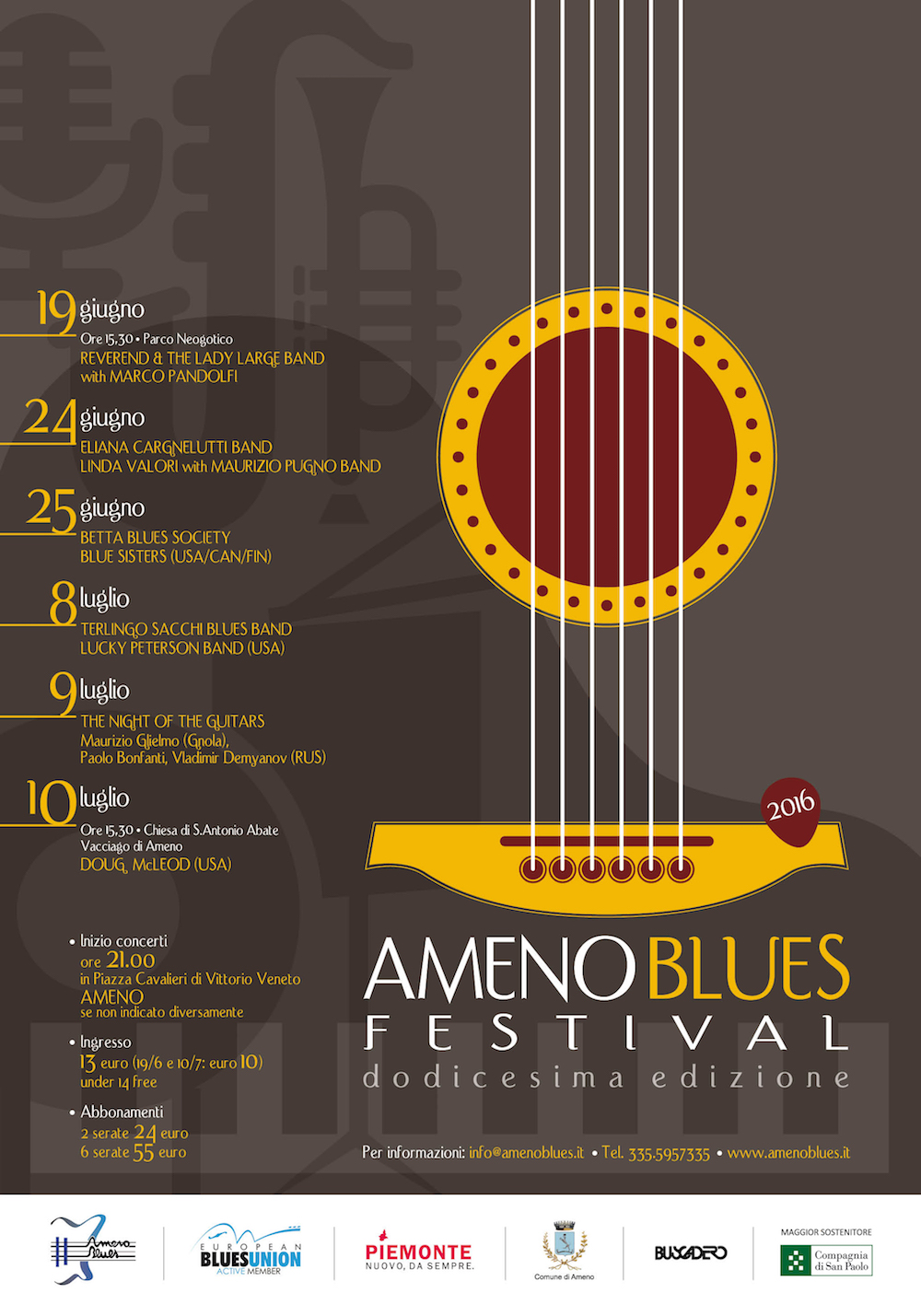 Launched in 2005, the festival has now gained prestige at national and international level, thanks to a careful artistic direction – led by Roberto Neri – always aimed at the search for a high quality and offering concerts fruit of a long and accurate with an eye also on keeping the cost of entry at an affordable level. Since 2011 Amenoblues has been a member of the European Blues Union and on November 3, 2012 organized the final evening of the Italian Blues Challenge that selects the Italian team that will participate the following year in the European event. The 2016 edition is as usual rich and interesting, with original and unrepeatable events, and with some peculiarities. The opening date (19 June) will see the participation, in the enchanting location of the Neo-Gothic Park, of a large band: the duo Reverend and the Lady (Mauro Ferrarese, guitars and vocals, and Alessandra Czechla, double bass and vocals) will perform in an enlarged formation with Paolo Degiuli on the phone, Federico Patarnello on drums, Joe Chiericati on piano and a special guest: Marco Pandolfi on harmonica. In addition, before the concert, the official award ceremony will be made of the Paint It Blues! competition, which we will talk about later. The new project "Women in Blues" will bring on stage – on the evenings of 24 and 25 June – four formations where women are protagonists: guitarist Eliana Cargnelutti, Linda Valori similar, physically and vocally, to an African-American soul woman, the Betta Blues Society with a female vocalist and finally the international vocal trio of the Blue Sisters: Layla Zoe, Ina Forsman, Emilia Sisco, three soloists exceptionally together (only Italian date). An opportunity for the public to discover how much the Blues can be a music even with a feminine appearance... On the evening of July 8, one of the most prestigious concerts of the 12 years of Amenoblues will take place: with his American band will perform Lucky Peterson, one of the most eclectic blues musicians of the moment, excellent guitarist, singer and fantastic hammondist. After the great success of 2015 is confirmed the project "The Night of the Guitars" with new protagonists on the evening of July 9: Maurizio "Gnola" Glielmo, leader of the eponymous blues band, Paolo Bonfanti, owner of a career over twenty years, solo To date he has produced 11 albums and collaborated with various national and international artists, and the novelty (exclusively) of Russian guitarist Vladimir Demyanov, a member of the formidable Blues Doctors. The three artists will play for this only time together: three great guitarists and vocalist, the most for lovers of the iconic instrument of the Blues. The festival will conclude on July 10 with the concert - organized in collaboration with A Country in Six Strings - by Doug MacLeod, country blues singer, composer and guitarist, winner of the title "Acoustic Artist of the Year" at the Blues Music Awards 2016. With the 2016 edition Amenoblues has also started a campaign to bring the younger generations closer to blues music with different initiatives. The first was the launch of the Paint It Blues! – for the design of the 2016 poster – also disseminated in schools in the area with an artistic address and attended by many students . At the conclusion of the competition, which saw students of the ITI Leonardo da Vinci of Borgomanero led by Professor Matteo Agarla, the artistic director Roberto Neri visited the school and met the children. The second is a promotion on Festival ticket rates that is being disclosed at all high schools in the area. In relation to the tariff policy, special packages have also been prepared for music schools and CRALs this year. In addition, since 2015, Amenoblues has been working with CiaoTickets for online pre-sale.